After a decade as a consultant, UChicago graduate student Nicole Jordan, BA ’96, found herself at a crossroads.

With a degree in economics and ambitions to be an entrepreneur, Jordan could apply to business school. Or she could cultivate her love of cooking and entertaining and attend culinary school.

Jordan chose the road less traveled and graduated from the Illinois Institute of Art (now defunct) with a course in Culinary Arts and Management in 2005. Eventually, she founded Nicole Jordan Catering, which prides itself on its high-touch service as much as it does its food.

Now, Jordan, a graduate of the Polsky Center’s Financial Fundamentals and Small Business Growth programs, is founding a second company, Urban Operation, which uses both her business consulting experience and culinary skills to help other small food businesses grow and flourish to become engines of their communities .

“I want to bring seven-figure companies to market,” said Jordan, a Chicago native who lives in the historic Pullman neighborhood on the South Side. “One can be small, but not small-minded.”

From advice to catering

Jordan traces her passion for cooking to her grandmother, who started out working at the Knickerbocker Hotel as a maid and ended up working in the kitchen, where “she was a beast,” Jordan said. “All 4’11” of hers.” She later opened and ran her own restaurant with Jordan’s uncle, inspiring Jordan with her culinary and entrepreneurial talents.

The decision to attend culinary school laid the foundation for Jordan’s career transition, but it took her a while to leave the familiar confines of management consulting. She ended up spending 20 years in consulting and project management, with a focus on advising startups on everything from healthcare services to technology. An attempt to start a catering business on the side was put on hold given her hectic travel schedule. 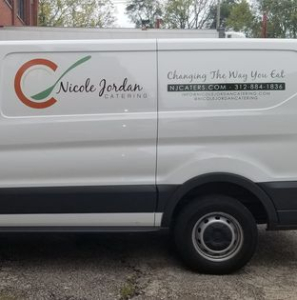 In early 2016, after her last bonus was secured, Jordan quit her job at JPMorgan Chase and left the American company forever. With the help of a friend, she officially launched Nicole Jordan Catering out of a community kitchen in the Beverly neighborhood.

“Thank god I had been living the life of a startup as a consultant because I was jumping off a cliff basically every day,” Jordan said.

Thanks to her robust professional network, Jordan’s business quickly grew through word of mouth. By September 2016, she had moved into a private kitchen in McKinley Park, a central location that she hoped would give her easier access to an inner-city clientele and give her space to take larger orders.

Jordan drew on her consulting experience and focused on providing superior customer service. She approached her relationship with her clients as a partnership to optimize their experience across the engagement lifecycle.

“I really believe in the customer experience,” she said. “That has led to great customer loyalty.”

Jordan has made many mistakes along the way. One of the biggest, she said, undervalued itself when it came to pricing. 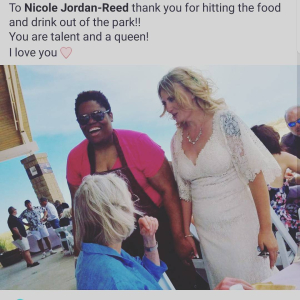 Despite her commercial background, Jordan still had a lot to learn to run her own business. She participated in numerous small business support programs, including the Goldman Sachs 10,000 Small Businesses initiative, before finding her way to the Polsky Center.

Jordan enrolled in Polsky’s Small Business Growth Program in the spring of 2021 and Small Business Financial Fundamentals in the summer, a new 10-week program funded by the Fund for Equitable Business Growth that will provide educational workshops, bespoke technical support and consulting related to Financial Capital Pathways and Readiness. Both programs cater to minority-owned businesses and women in South and West Chicago.

Financial Fundamentals taught Jordan tactics for approaching the financial structure, including dealing with debt, and encouraged her to use her audience in a variety of ways to create other revenue streams.

“It put me in a regime and in a space with other companies and networks, got me out of my own head and got a different perspective,” Jordan said. 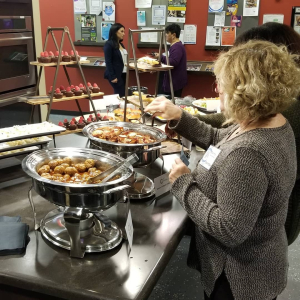 The new insights came at a critical time, as the COVID-19 pandemic had forced them to step back and reassess their business. With all catering orders canceled for much of 2020, Jordan stayed afloat by utilizing all available small business grants and loans, feeding frontline workers and using the time to strategize.

She decided to move away from small private events like weddings and to focus solely on institutional clients like hospitals, universities and corporations who tend to host larger events with simpler budgets that allow for efficiencies.

“Economists said you have to refine into the niches that bring more profitability,” Jordan said. “It helps make our catering approach more standardized.”

As her menus and catering processes are streamlined and standardized, Jordan is stepping down from daily onion slicing to focus on growing her new strategy consulting business.

The Urban Operation aims to help small food companies address what Jordan calls “junkiness” in their operations and restructure themselves internally to be more efficient, productive and profitable.

The end goal, she said, is to shift the mindset of businesses of color so that they can grow together and create a knock-on effect of profitability for other businesses in the community.

“Being small doesn’t mean you are small potatoes,” she said. “A small change can really increase a company’s growth and impact a community where you literally create the economy. You are the economy.”

Article by Alexia Elejalde-Ruiz, Deputy Director of Media Relations and External Communications at the Polsky Center. A veteran journalist, Alexia was most recently a business reporter for the Chicago Tribune. Reach out to Alexia via E-mail or on Twitter @alexiaer.